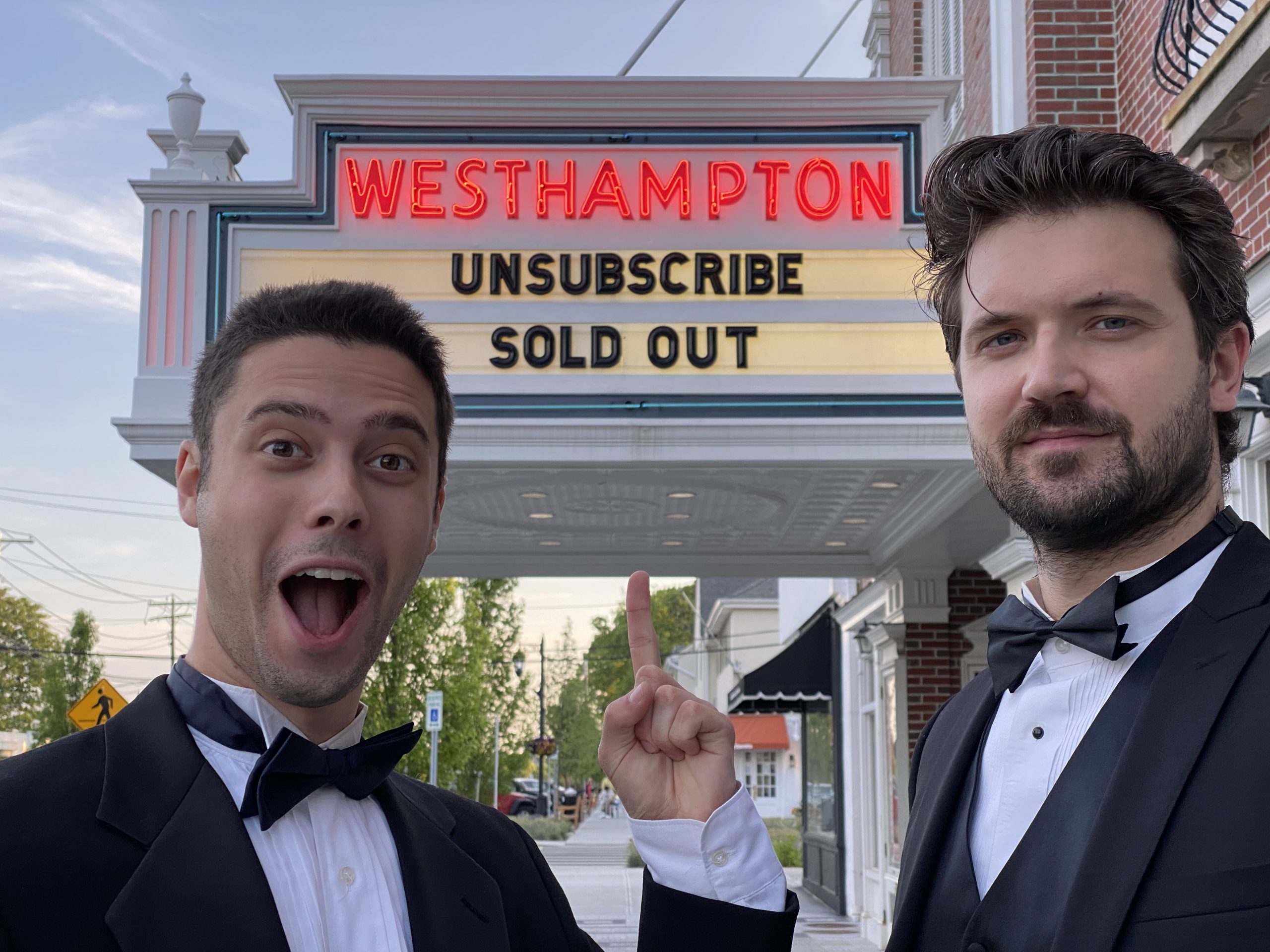 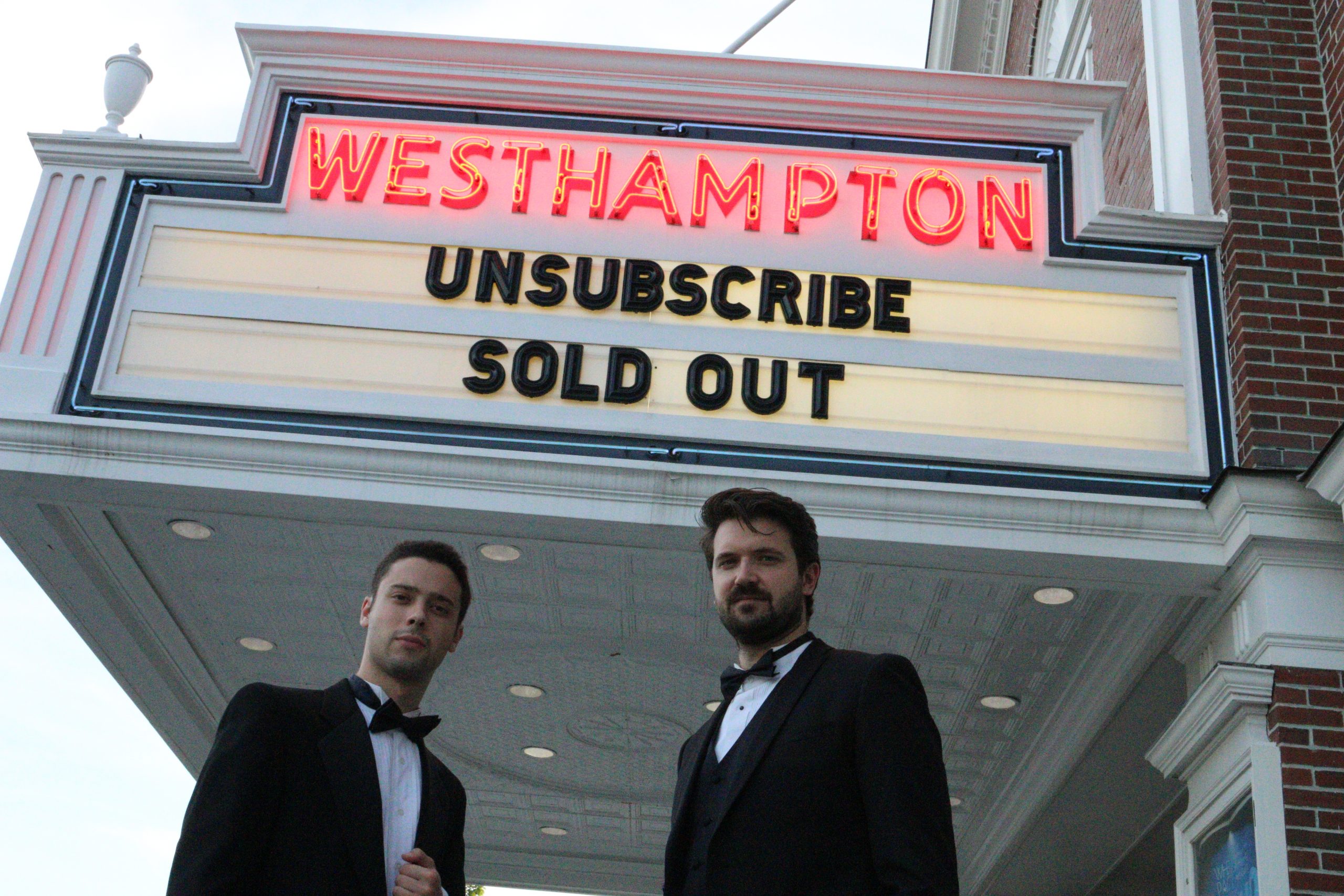 As screenwriters, many of us have fantasized about having a movie that hits number one at the box office. But considering our country is in the grip of a pandemic, it doesn’t seem possible to even get a film made, let alone soar to the top of the charts. But one filmmaker saw this strange time as an opportunity, not a setback. A few weeks ago, writer/director Christian Nilsson made his dream of topping the box office charts come true.

Born and raised on Long Island, Nilsson went to a small art school called Five Towns College to study filmmaking. Since graduating, he’s been trying to break into the film industry while working as a video journalist, even earning an Emmy in 2017 for the Best Historical Segment category for his short documentary The Fight To Be The Oldest Bar In NYC.

Before COVID-19 shut down most of the country, Nilsson was set to produce and direct his feature film Westhampton, a psychological drama about a damaged film director who’s forced to confront a tragedy from years earlier. Nilsson had put together a cast that included actor Finn Wittrock (American Horror Story) as the lead actor, and raised the $1.3 million budget. “It was all coming together. It was really exciting that I was finally going to be able to do this thing that I had been working on for so many years. Then COVID hit and as quickly as that spread, we lost our funding.”

Nilsson began to ask himself some tough questions. “There are a few moments in my career where things fall apart and you have to ask yourself the question, ‘Is this just not in the cards for me? Is the timing wrong?’ That was definitely where I was in the first week of May when Eric Tabach, a Youtuber I worked with when I was at Buzzfeed, reached out to me with a really crazy request,” Nilsson says. 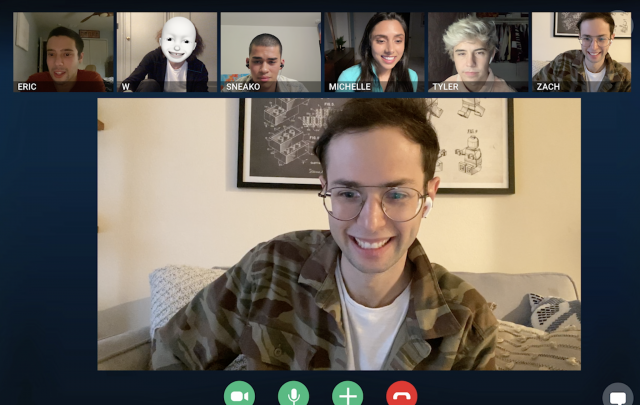 Still from ‘Unsubscribe,’ a film that takes place on a Zoom call. Photo credit: Christian Nilsson.

That request was to somehow get a film to score high on the box office charts. Since there were no new movies coming out, and theaters were mostly closed, Nilsson thought they might have a chance. He explained the concept of “four-walling” to Tabach, which was to rent a movie theater for a flat fee and buy out as many shows as possible, knowing any revenue from ticket sales would go straight back to the filmmakers.

It was a long shot, but if they were going to make it happen, they needed to act quickly. Once the theaters reopened, it would be game over. He gambled that the theaters would be closed for another three weeks and would need to have a finished product in that small timeframe. 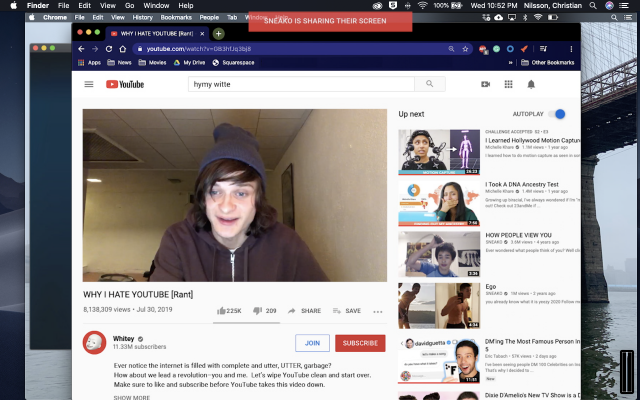 “What I said to Eric was that we should use this opportunity – an opportunity that is only possible because of the crazy moment the world is in – and we should make a short film that speaks to that craziness.”

With the growing popularity of the video chat app Zoom, Nilsson decided creating a movie using Zoom was the best way to keep the actors safe. It would also be culturally relevant since so many people are using Zoom during the pandemic.

“[The script] was written in a single day. Cast the following day. We started shooting the day after that. Within four days we were completely in the can and then it was three weeks of editing,” says Nilsson who adds that the film was made on a $0 budget. Unsubscribe is 29-minutes long and about a group of YouTubers who think they are joining an online video call for a friend’s birthday but quickly discover they’ve fallen into the trap of an Internet troll.

On Wednesday, June 10, Unsubscribe became the number one film in America earning a modest $25,488. Nilsson and Tabach dressed in tuxes and were the only two people in the audience – sitting socially distanced, of course. 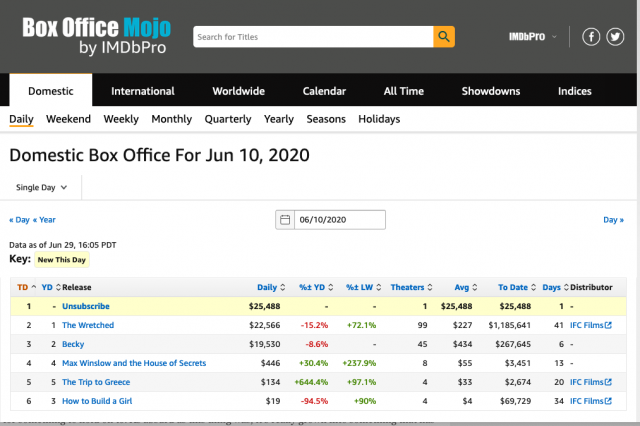 Screenshot from boxofficmojo.com showing ‘Unsubscribe’ as the number one film for June 10, 2020.

Now, both Nilsson and Tabach are getting tons of press for their efforts and are taking meetings with respected filmmakers. “Suddenly, the thing that felt so far off just a few weeks ago feels really attainable. Eric had been laid off from his job and we were both in a place where we were looking for something to hold on to. As absurd as this thing was, it’s really grown into something that has momentum,” says Nilsson.

Though he doesn’t have an agent or manager at the moment, Nilsson’s open to working with one due to the amount of requests coming his way. People are asking about the possibility of making a feature version of Unsubscribe and other similar YouTube-type horror films. “Suddenly, it’s become much bigger than I’ve been able to control,” he says.

As for the future, Nilsson is remaining optimistic. “We are a resilient people, artists even more so. I’m hopeful that we’ll be able to get back together and figure out a way that we can do this. I think Unsubscribe is proof of that. This is a film that could not have existed if not for the creativity of that moment. I think difficult times really inspire us to think differently and that really breeds creativity and creative thought.”

You can watch the full version of Unsubscribe on Vimeo for $3.99.