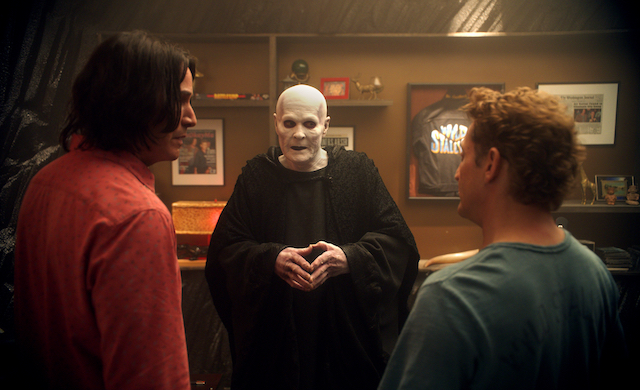 It’s excellent that Bill and Ted (Alex Winter and Keanu Reeves, respectively) are back in the bodacious three-quel Bill and Ted Face the Music! It’s heinous to think that it’s been 31 years since the two dudes started time traveling together, but that’s only given us all time to share the first two films with our own outstanding little dudes and babes. I chatted with the franchise’s writers Ed Solomon and Chris Matheson about how it all started.

I was surprised to learn that the characters of Bill and Ted were born in an improv group Solomon and Matheson joined in college.

“We started with these characters on a whim,” says Solomon, “on a random day in an improv group that we formed without an audience.” That group was the UCLA Comedy Club. They would rent a small theater called the Gardner Stage in Hollywood on Sunday nights for twenty bucks.

“We never wanted an audience,” says Solomon, “we just wanted to push ourselves comedically and try stuff. It started when we got a random suggestion about two guys who don’t know anything about history study history. We just messed around as Bill and Ted for a long time, but we never thought about putting them into a movie or anything, we just enjoyed playing them. We did perform them once in front of an audience, at UCLA. I basically dragged Chris on stage with me to do Bill and Ted. The audience asked us questions about social events,” he says.

“We just answered everything as either excellent or bogus,” says Matheson. “That was the only time we actually performed Bill and Ted in front of an audience.”

Ah, it would have been stellar to see!

The writers and friends developed a true fondness for the characters and tossed around the idea of making a sketch movie like The Kentucky Fried Movie that would include a Bill and Ted sketch, but then realized the slacker dude besties had enough juice to fill an entire movie.

“We thought ‘What if they had to study for a history test and had a friend who drove a van and could time travel?’ Though we never explained how or why,” says Solomon with a laugh.

When they got the film set up at a studio, the producers thought the time traveling van was too similar to the DeLorean in Back to the Future so the director Stephen Herek suggested changing the van to a phone booth and the rest is history. The film made over $40 million globally and spawned a sequel, Bill and Ted’s Bogus Journey in 1991, and a TV show, Bill and Ted’s Excellent Adventures in 1992.

The latest installment, Bill and Ted Face the Music, finds Bill and Ted as middle-aged dads still rocking out and tasked with writing a song to save the world. Only this time, they’re doing it with their daughters.

“At the end of the second movie, Bill and Ted have two kids, Little Bill and Little Ted,” says Matheson.

At the time, it made sense to Solomon and Matheson that the children would be boys who could carry on Bill and Ted’s adventures. But back in 2010, when they decided to write a third film incorporating the boys, it wasn’t working.

“When we were writing it, we stuck with the boys as Bill and Theo, but we really struggled because they were little knock-offs of Bill and Ted and that seemed stale. It was like a major rehash,” says Matheson.

After a few drafts they decided to take a different route and make the children daughters. 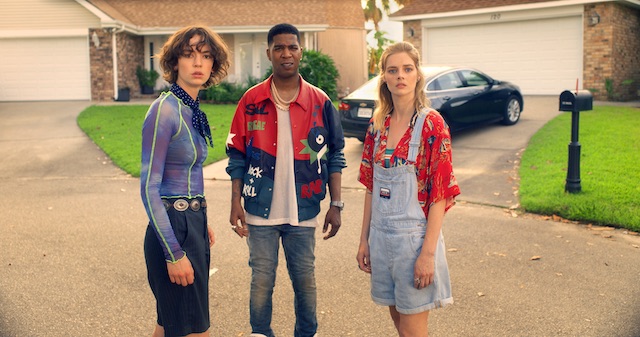 “We made them Billie and Thea and pretty quickly it became evident that was going to work a lot better. It had more life to it. The girls’ voices made more sense to us, the story started to fall into place,” added Matheson.

Billie (Samara Weaving), and Thea (Bridgette Lundy-Paine), definitely inherited some of their fathers’ quirks and add blissful joy to the film. Other actors joining the adventure include Holland Taylor, Kristen Schaal and Beck Bennett.

The other thing that’s different about this film is that it’s being released in the middle of a pandemic where the majority of movie theaters are currently closed. But the show must go on.

“We wrote this to be released in theaters,” says Matheson, “and we hope that wherever it’s safe, people will do it. But where that’s not safe, we still want people to see it and hopefully enjoy it. The moment seems right for it. It’s kind of a dark, fearful, stressful, agitated moment for the country, the world. Hopefully this movie will make people feel better – at least for 90 minutes.”

Solomon takes the mostly video-on-demand release in stride. “The first movie did fine, but more in a culty way. The second movie was the same. The movies didn’t really settle into public consciousness for at least a decade and a half after they came out. That means most of the people who saw those movies saw them at home, on video. So that’s why I don’t really mind if people watch this movie in their homes. I don’t see this as a negative thing. I don’t think I’ve ever written a movie and used this phrase, but it’s a wholesome movie. A family-friendly movie. It’s a movie you can watch with your kids and feel very safe about it. There’s no swearing, no sex, no violence. The irony is that of the three movies, it’s the most cinematic in terms of production values. But people’s home viewing systems are so much better than they were back then, anyway,” he says.

The writers shared this advice for screenwriters.

“Something that’s been useful to us,” says Matheson, “starting with Bill and Ted is to follow the character. The character will tell you what the story is. Starting internally, trying to find the human being. When you feel them, it becomes clearer what kind of story you put them in. I personally don’t believe in starting with the structural stuff because it turns into a puppet show. You’re just coming up with the puppets to populate your idea. Ironically, all that third act stuff will still happen, I just don’t think you can reverse engineer it. I think it happens by following the characters organically,” he says.

Solomon agrees. “There’s a tendency for young screenwriters to follow books about structure and try to plug characters into that, which is doing way more harm than good. A movie that has a ‘flawed’ structure but has a true voice will resonate way, way more than a movie that’s structured ‘perfectly’ but doesn’t have inner-life,” he says.

Given that the characters Bill and Ted started with Solomon and Matheson playing them in an improv group, the advice to start with character makes sense. They really got to know them personally – inside and out – before crafting a film around them. It’s a truly excellent way to work.

3 Replies to "Bill and Ted Face the Music Writers on Writing from Character, Not Structure"