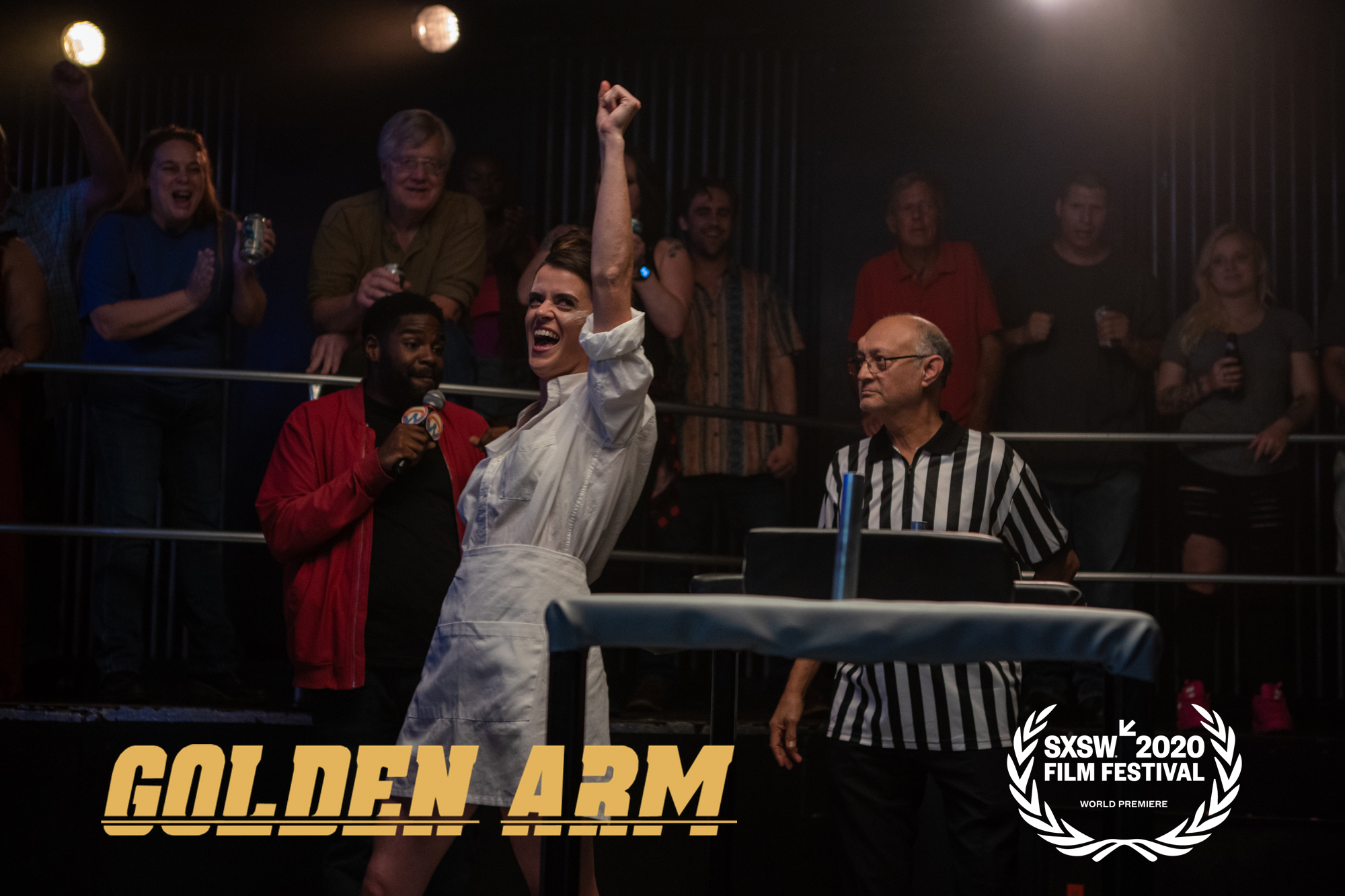 You may know Jenna Milly as the Editor in Chief for Screenwriting Magazine, this fabulous writing blog that shares inspiration from both successful and emerging writers, along with tips on the craft of screenwriting all to support this lovely writing community. I’m incredibly excited to share with you that Milly and her writing partner, Ann Marie Allison, have written the new film Golden Arm that releases Friday, April 30! I was lucky enough to chat with both writers ahead of the film’s premiere.

Golden Arm is an indie, sports comedy about bakery owner Melanie (Mary Holland), who finds her life is in crumbles as she faces divorce and the impending loss of her bakery. When her best friend Danny (Betsy Sodaro), a scrappy, trash-talking trucker, convinces her to train to be a female arm wrestler on the competitive circuit, they set off on a journey of self-discovery and empowerment, while exploring the kooky, hilarious world of ladies’ arm wrestling. 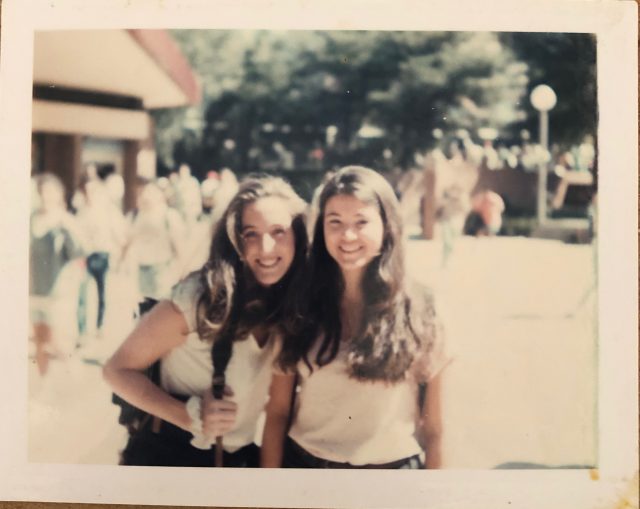 Milly and Allison met when they were in high school in Marietta, GA. At a time when most teen girls are preoccupied with boys and fitting in with the popular crowd, Allison says she was impressed by Milly because, “Jenna didn’t take herself too seriously.” It was this offbeat perspective that would eventually lead both ladies to creating unconventional characters that would populate surprising, female-driven stories full of heart and laughter.

But they didn’t begin writing together right away. Milly pursued a fast-paced career in journalism at CNN, while Allison went to grad school in Maryland to study psychology. Milly would learn how to write stories that were exciting, thought-provoking and really captured the reader’s interest. Allison would learn about the inner workings of the human mind, discover people’s deep, sometimes twisted, motivations and behaviors. The combination of these disparate skills created a unique comedy-writing team that Milly thinks, “works really well because we’re coming at writing from different places.” Milly was great at story; Allison at character. Eventually, each writer’s expertise would rub off on the other.

When Milly left Atlanta to study screenwriting at UCLA, she would share all the details of her classes with Allison in their lengthy daily phone conversations. So intrigued by Milly’s creative odyssey, Allison asked if she could work on a screenplay with Milly, who answered with a resounding, “Yes!”

Slowly, the two began honing their craft, writing one screenplay after another. But the path to actually getting one of their screenplays produced was daunting. The friends never gave up. They soon determined that sometimes, it just takes the right idea, sprinkled with a little luck, and a whole lot of perseverance.

The idea for writing Golden Arm came from one of the most unlikely places: a charity Allison started with her friends in Washington, D.C. called the D.C. Lady Arm Wrestlers. For fun, women would train to arm wrestle, come to a “bout,” and create an alter ego with an entourage. They would then bring all their friends and bet on their favorite arm wrestler to help raise money for a good cause.

“What built up around this,” says Allison, “was a movement of feminine empowerment. These women were moms, lawyers, doctors, lobbyists.” So these professional, conservative ladies would show up at the rehearsal, very buttoned-up in their appearance. But when the time came for the actual bout, they totally transformed into shockingly wild characters. “They would have their hair did, boobies out, ready to throw down,” explains Allison. “Or they’d be dressed like Ragin’ Regan who was one of the characters modeled after Regan in The Exorcist! She had puke all over her shirt and her entourage were nuns and priests who were throwing out holy water!”

Allison would share with Milly the funny, colorful pictures from the events. The images made a lasting impact on Milly, and she even wrote an article for Huffington Post about the events. Then, after noticing the positive response she received from the article, “I thought we should write a movie about this,” Milly says.

They started developing a fictionalized version of the arm wrestling world. “We started to look at other female sports movies, but there aren’t a lot of those for women,” says Milly, “So, we decided to do more of a traditional underdog plot.” Filled with heart and humor, friends and colleagues all loved the script. But getting a studio behind the film would prove challenging.

The writing team’s manager at the time took the script out to various producers and studios in Hollywood, but they didn’t get the response they were hoping for.

“We just got, ‘Hey, this is really funny but it’s not commercially viable. Who’s going to go watch a movie about ladies’ arm wrestling?’ That’s literally a quote we got,” says Allison, adding, “People just didn’t see the commercial potential of it.”

Needless to say they were disappointed, but they never dreamed of giving up. “Anyone who knows Jenna knows that if you tell her, ‘No,’ she’ll say, ‘Okay, how can I get around that no?’ That experienced journalist who has to get the story was awakened in her,” says Allison. And if that meant raising a good amount of money on their own, then so be it. 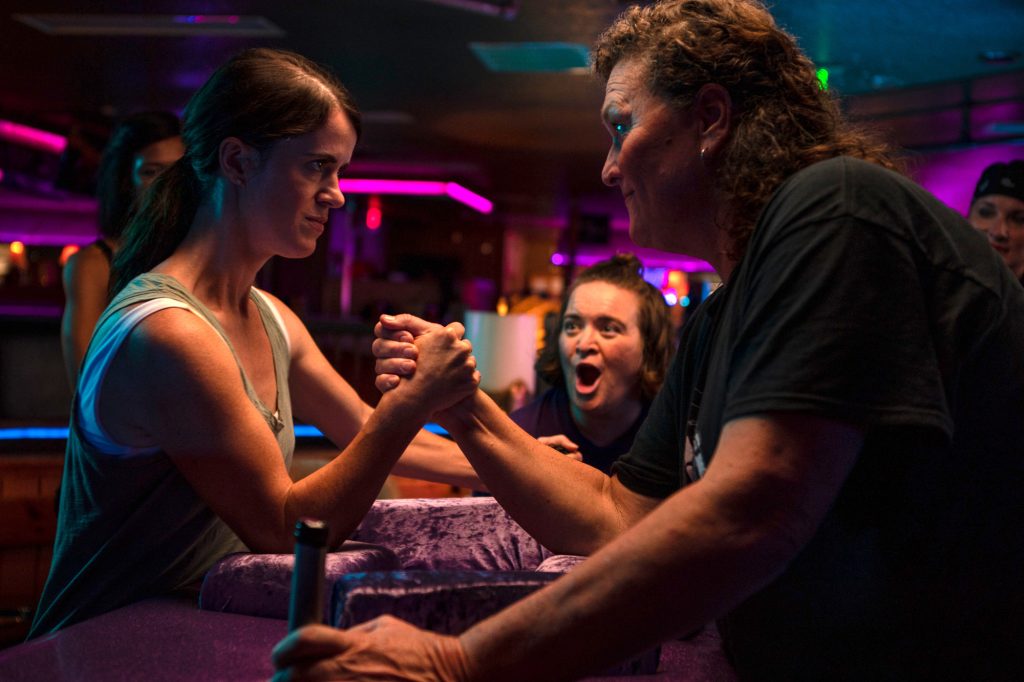 Both Allison and Milly had raised money for producing/writing/directing their individual short films in the past. The plan was to try to replicate that process but for a feature film. They rewrote the script to make it less expensive so they could shoot it for a $1.1 million budget.

In three years they managed to raise a good chunk of the money but relied on Oklahoma’s Film Enhancement Rebate for the rest. “Basically, it’s money in your hand if you spend a certain amount of money. They send you a check. So, lots of love to Oklahoma! It just became this business transaction,” says Allison, who admits having to figure out the ins and outs of forming a company and selling units. “But we did have some great mentors and executive producers to help guide the film,” she says.

To get more people on board, they shot a sizzle reel and held a live reading of the script. “We had this clear vision for the film, and we just had to bring people to it!” says Milly.

Golden Arm was accepted into the SXSW Film Festival in 2020. Unfortunately, the festival was cancelled due to the pandemic. Robert Schwartzman’s company Utopia Films purchased the film, however, and is now releasing it on various streaming platforms.

Now, the writing team’s career is taking off. They have several new projects in the works, including a comedy for Netflix called, It’s Wednesday Night, about a newly divorced mom who disappears after partying too hard. David Guggenheim (Safe House) and Alexa Faigen (Bird Box) are producing.

Both Allison and Milly have this advice for emerging writers. While they say networking is important, writers should really target their efforts on those who make projects similar to the ones they write.

“We went through IMDb and looked at movies we liked or were like our movie. Then we’d find out who made those movies, what producers were on those movies and we’d cold call or email them with a little hello and logline of our script to see if they were interested in reading it.” Good advice.

You can watch Golden Arm this Friday, April 30, on various streaming platforms and in theaters.