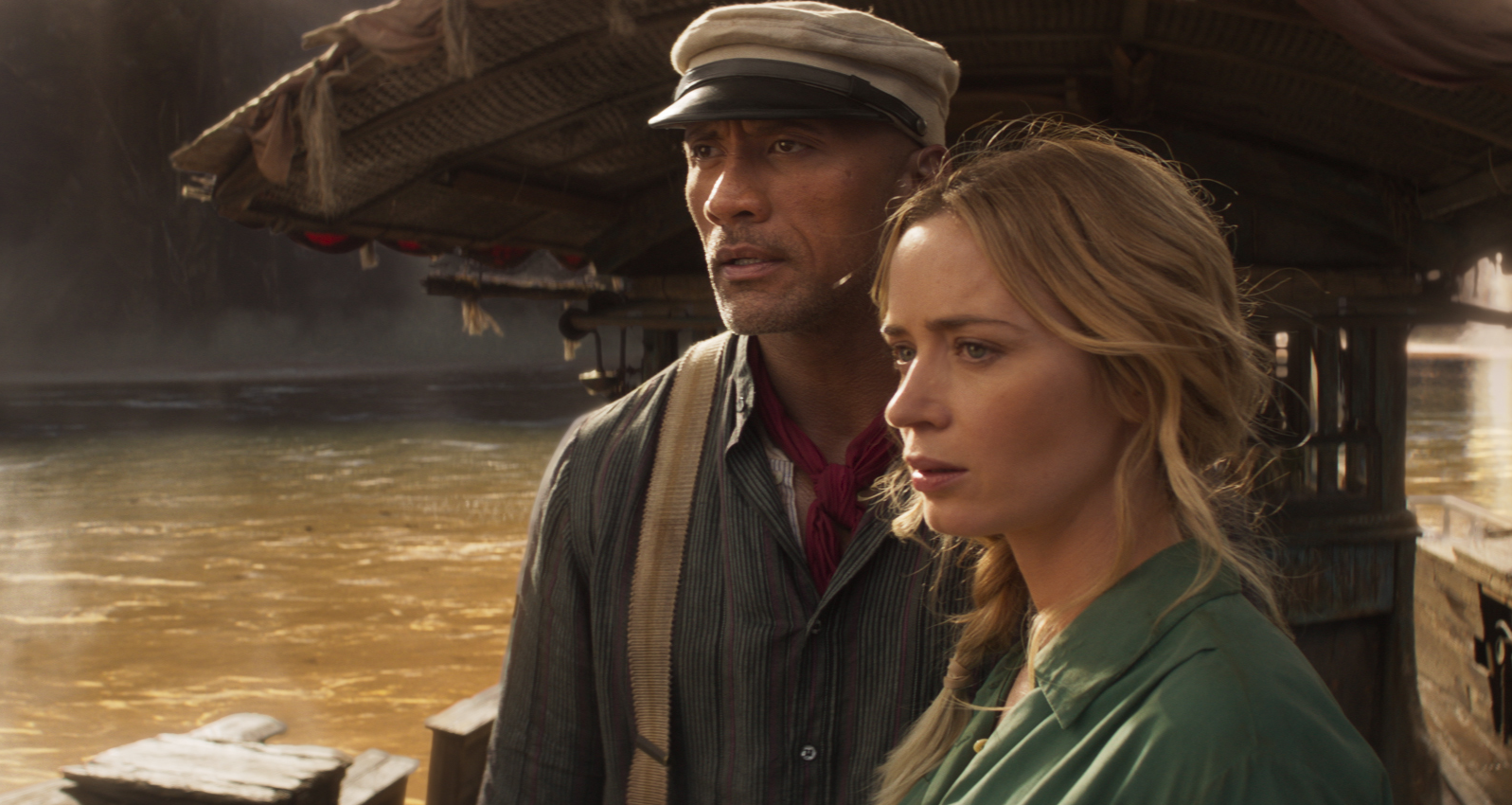 Jungle Cruise is a delightful thrill ride down the Amazon River and stars Emily Blunt as researcher Dr. Lily Houghton who’s on a quest to find the fabled Tears of the Moon – a plant native to the Amazon jungle that is said to have powerful healing properties. Once in the Amazon, she hires a grifter boat captain, Frank Wolff (Dwayne Johnson), to sail her to the spot shown on a secret map where she hopes to find the magical flora. The movie is based on the Jungle River Cruise ride that first opened at Disneyland in 1955.

Like most big studio movies, Jungle Cruise has multiple writers credited with writing the screenplay. In this case, there are three: the writing team of Glenn Ficarra & John Requa (I Love You Philip Morris), and Michael Green (Blade Runner 2049). Ficarra and Requa wrote the first two drafts of the film before the TV Show they direct, This is Us, became a huge success and they had to hand off the screenplay before it was completely finished. “Everyone seemed to do just find without us,” says Ficarra in support of the project. Green was then brought in to finish the job and the rest is history. LIGHT SPOILERS AHEAD.

Ficarra and Requa say at the time of pitching and then writing the screenplay for Jungle Cruise, they had just gone down the deep rabbit hole that is World War I. “We’re nerds,” says Requa, “but there was a lot of rich stuff in WWI, like submarines and the Hapsburgs. Also you have the suffragette movement at that time, and thinking about women’s emerging roles in Western culture, not to mention that [the film] African Queen was also set in WWI, it all kind of came together.”

The writers say the suffragettes were fierce fighters for women’s rights and a great role model for Lily who insists on wearing pants despite the social taboo at the time. But Ficarra and Requa wanted the character of Lily be relatable to a modern audience, too. “We were in a particular cultural moment,” says Ficarra, “and the role of women in old adventure films like African Queen is really dated so we wanted to show what women really were doing back then – they were pioneering, going to college – so we wanted to acknowledge that.” And by doing so, they helped create a role an A-list actress like Blunt would be thrilled to play.

The other element that played a big role in shaping the story was the lack of antibiotics during WWI (1914-1918), where many soldiers died of infections (penicillin wasn’t invented until 1928!). Ficarra and Requa thought it made sense that Lily’s character would be motivated to find this plant with healing properties to help win the war, creating a strong motivation for her to journey all the way to the dangerous Amazon jungle.

But as any great writer will tell you, a story is only as strong as its characters. “Characters are the thing that makes or breaks a movie. Obviously, plot is important but it was really important to have the characters be alive and entertaining,” says Requa.

Green was thrilled to take over the project and says he inherited so many great story elements from Ficarra and Requa. “Submarine in the Amazon River? Yes, please!” says Green. But still more work on the protagonists, Lily and Frank, needed to be done.

He describes the two lead characters this way: “Lily is absolutely heedless and fearless, fun and capable, and all the things that are typically reserved for male heroes in these movies. By extension, we were going to pair her up with Frank Wolff who was not heroic at all. He was going to do a few good things despite himself, but was really the antithesis of the hero the moment wanted. We wanted her to be the action hero and for the Frank Wolff character to be the scoundrel.” By setting up the characters this way, each one’s arc clear became clear – Lily would need to learn that love for another human being is much more powerful than magical mysteries. Frank would need to learn how to sacrifice for another to find meaning in his own life.

But the most important thing to Green was to bring out the romance. “I really wanted Jungle Cruise to be a romantic comedy. When I came in, I thought, ‘Let’s keep all the things that tell the romantic comedy and build a relationship between two people in this incredibly miraculous place with all the magical elements – but have these elements be in support of telling the story of how these two people find each other and come together. For me that was the way to sharpen the edge of the machete going through the jungle on this because there was so much happening! I was able to stay focused because I knew it was about sticking with that spine.” 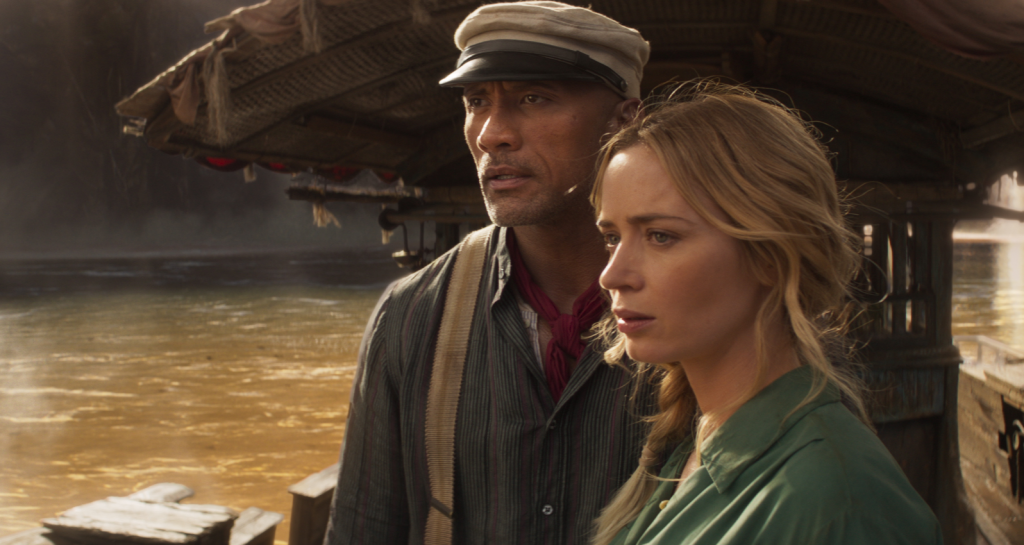 In addition to the protagonists and the love story, Jungle Cruise is a story with multiple antagonists that include: the setting of the jungle (it’s in the title, after all), Prince Joachim (Jesse Plemons), the German with the river submarine, Aguirre the Conquistador (Edgar Ramirez) and even patriarchal society. I asked Green how he managed writing and tracking so many villains.

“With any antagonist, whether it’s one or 50, the hardest thing – and the most important thing – is to make sure you know who they are and what they want, and why they want what they want. You can have as many villains as you can answer that question interestingly. One person might want the secret magic object in this film because they believe it will help them win a war; the other one wants it so they may be free of a curse, or save their daughter. That’s really the hardest part – but the most satisfying part – once you answer it correctly. Who is your bad guy, what do they want and why?  If you can keep that fresh and interesting, you’ll have much more fun writing their dialogue. A well-motivated villain should always get the best lines,” says Green.

Green has this advice for writers tackling a big story with many moving parts: “Whenever you’re thinking of something that’s an adventure or based on an IP or a familiar name, you have to start with what you love about it. Not what everyone else loves about it, not what the market testing says people love about it, but what do you love about the subject matter. Really try to express through your story the things you love about it.”

Green adds that it’s important not to bring cynicism into your work. “Completely embrace what you are there to do. And do it joyfully. If you come to it with any sneer or snide [thoughts] or try to undercut the thing, then you’re not celebrating what can be great about it.”

Black Widow Writer on Making the Story an 'Emotional investigation of Natasha Romanoff.'